Which Video Switchers Can I Use To Stream Out Directly 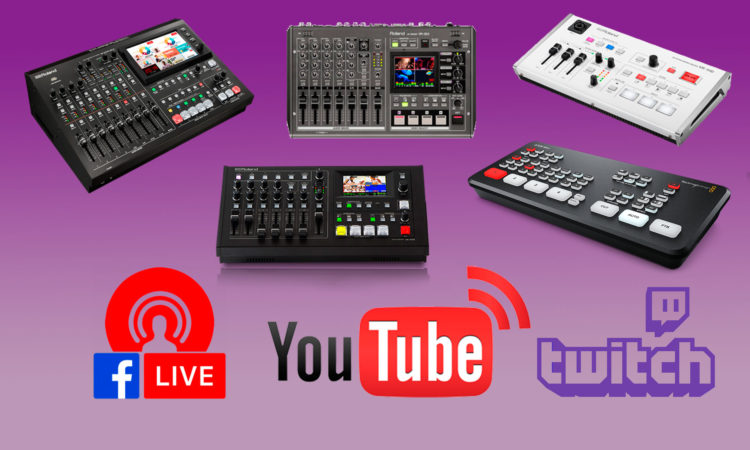 There are plenty of examples where you might want to connect multiple video sources and stream them out to a wider audience over Facebook Live, YouTube Live, Twitch.tv, OBS, Wirecast or any other streaming platform.

This might be a simple broadcast using just one or two cameras, or you might want to produce a complex production with multiple cameras & microphones as well as other video sources such as laptops for presentations or a gaming console.

The best and easiest way to achieve this is to pick a video switcher that has a USB output – this way it will simply act as a webcam in any software you choose to stream to. Because USB is a universal connection the setup is really easy and low-cost.

As you can imagine there is a wide range of video switchers and mixers to choose from, in this article we’ll outline some of the most popular models as well as some of the feature sets of each.

Each input has a built-in scaler meaning it will automatically up-convert or cross-convert whatever video format you give it , whether that’s 1080p, 1080i or 720p, and convert it to the video standard set by the ATEM Mini. As well as the 4x independent HDMI inputs, you can also connect professional grade Microphones thanks to 2x 3.5mm stereo audio inputs – easily connect desktop or label microphones or bring in an audio stream to further enhance your production. ATEM Mini features a full audio mixer packed with features so there’s no excuse for the audio not to match the high quality video.

Like the rest of the ATEM range, the Mini allows users to use a whole host of powerful features thanks to the ATEM Control Software by Blackmagic Design. This software offers far more control and features than are available on the limited real-estate the ATEM provides. This is the same software than high-end broadcast facilities have access to so at the price of the ATEM Mini this is an incredible package. Some of these features include ATEM Advanced Chroma Key, full DVE, still store for graphics and much more.

As you would expect there are plenty of hardware control options available to you on the switcher itself – these include easy to use buttons for selecting sources, adjusting audio inputs, as well as selecting video effects and transitions.

Overall this is a fantastic option for anyone who needs a switcher with up to 4 inputs to stream out to the internet, at the price you really can’t go wrong. Now you just have to be able to get hold of one as go like hotcakes.

The VR-1HD has three “worry-free” HDMI inputs, and each one accepts a variety of HD and computer-based video resolutions. This lets you connect, switch and stream different sources including cameras, presentations, gameplay and even smartphones and tablets without having to think about it. The audio from these sources can be blended with the two studio-quality XLR microphone inputs and dedicated line input. Best of all, as the VR-1HD is designed for live broadcasting, its dedicated controls and top-mounted mic input (with gooseneck mic) let you go hands-free and headset-free while livestreaming.

The VR-1HD uses the same connection technology as webcams, so just hook up to your computer via USB 3.0 and fire up the live casting or recording software. Then jump straight into a professionally produced, Full HD broadcast on your favourite platform, including Twitch, YouTube or Facebook Live.

VR-1HD is a great solution for an easy to use multi-input switcher that is packed with great features.

This is an all-in-one A/V mixer with built-in usb port for web streaming and recording, ideal for anyone who needs professional features but maybe has older cameras such as education facilities or houses of worship.

The Roland VR-3EX is a 4-channel SD performance audio video mixer which features HDMI inputs/outputs, USB streaming, HDCP support, built-in touch multi-viewer, an audio mixer all in a compact portable unit. Designed to be a live production switcher the built-in audio mixer with up to 4 frames delay to “lipsync” your video source. Scaling on the output allows you to output up to 1080p HD Video and Audio quality.

The VR-3EX includes a scaler on the output, allowing for upscaling to HD if necessary. The USB port also allows for the simultaneously recording of programs to a Mac or PC, or upload to various streaming services.

The VR-3EX features an incorporated Keyer for luma, chroma and Picture in Picture (PIP) effects. The mixer enjoys 250 further transition and 11 built-in effect options. The 18-channel audio mixer receives audio embedded in the HDMI stream, the four balanced XLR inputs, unbalanced analogue sources via the two RCA jacks, stereo mini jacks and the amalgamated microphones. You can also delay the audio by up to four frames to adjust the “lip” of your video.

A multiview screen can display your four inputs on screen simultaneously. This makes it possible to transition from one camera to the next by merely touching the camera view on the monitor screen.

The VR-3EX is the choice when you might need to connect sources from a wide range of video connections whilst still needing to create a professional broadcast.

Roland’s VR-4HD is a 4-channel all-in-one Audio & Video mixer featuring three dedicated HDMI video inputs compatible with a variety of equipment and support HD signals at 1080p/1080i/720p. The fourth input features a built-in scaler making it easy to connect either a video or computer signal and supports analog or RGB for older equipment should you need it.

Audio is a huge part of your production and the VR-4HD makes perfecting this a breeze thanks to Roland’s digital signal processing and advanced features such as auto-mixing, echo cancel and delay for perfect lip-sync between audio and video. The audio mixer can mix the four XLR microphone inputs, stereo RCA and 1/8 mini connector along with the audio embedded in the four HDMI inputs. The final mix can be output via XLR, RCA and also embedded into the HDMI output giving you ultimate flexibility.

Perfecting the look of your production is super-easy thanks to the effects and transitions the VR-4HD can offer. These include DSK (Downstream Keying), Picture-in-Picture (PinP), Split and Quad composting effects ideal for creating news style broadcasts and corporate presentation content.

The DSK function is great for overlaying titles, song lyrics or logos onto incoming video sources that can be switched in the background while text or images remain displayed. The DSK supports both Luminance Keying (Black / White) and Chroma Keying (Blue / Green) for compositing two videos in one screen using Picture-in-Picture, or for using the split function – ideal for seminars and presentations.

Of course taking the USB 3.0 output from the mixer makes streaming easy and the VR-4HD embeds the audio mix with the video program and delivers at the selected resolution. Should you need to record the stream at the same time then Roland have you covered with their VR Video Capture application for Mac and PC. This is an easy and cost effective way to capture uncompressed video with high resolution audio and can help facilitate the immediate delivery of content to both online video sites and customers.

VR-4HD is fantastic for small-scale productions such as Education, Video Conferencing, House of Worship, Event and Meetings and any Video Webcast.

Roland’s VR-50HD takes things up a level and essentially is a High-Definition studio in a portable unit and combines the functions that in the past 3 different units would be needed for. Featuring a total of up to 12 video inputs over a range of connections including HDMI, SDI, Composite and RGB/Component and a maximum 4 channels this mixer can cover whatever you throw at it. Similarly on the audio side the mix of XLR/TRS combo jack and RCA phono jacks provide 12 mic/line channels plus the ability to bring in audio embedded through the video connection, so you can bring in a wide range of audio sources including microphones and audio streams with ease.

You can connect cameras, computers, Blu-ray players, DVD players, microphones, iPads, and more for use as input devices, without having to worry about whether the equipment is analog or digital or what formats they output. In addition to HD-SDI and HDMI output for HD recording equipment, the unit also provides USB 3.0 and 2.0 output. This enables the ability to connect a computer and perform live streaming and recording. All digital video output connectors include embedded audio as well.

VR-50HD features a built-in large 7″ touchscreen LCD that enables an intuitive and easy to use operation. Using the seven-way multi-viewer to display four input pictures, composited material, and program out simultaneously eliminates the need for external monitors.

This switcher has a powerful multi-layered composition engine supporting a total of four layers. This lets you place keyed video on picture-in-picture, then also superimpose a still picture imported into the unit’s internal memory over that. PinP and key compositing use independent scalers, so you can adjust the positions and sizes however you like. You can switch the effects on and off at any time using the dedicated composition buttons and you can set the order of succession for PinP, PinP/KEY, and STILL to your preference making this hugely flexible to the way in which you want to work.

Use the VR-50HD as an audio mixer, video switcher, multi-viewer touchscreen and USB streaming device all-in-one to produce high-quality video productions ready to stream out to your choice of platforms.

Plenty of options here to suit any budget or requirements you might have from quick and easy to larger scale productions. Whichever route you go for you can relax when it comes to streaming it as all the options simply work over a simple USB cable – concentrate on making the production look as polished as possible and not on the technology that allows it to reach your audience.

As always if you require further information or assistance you can do so, either through our ‘chat’ function, email: [email protected] or by phone: 0203 137 2901; we’re always here and happy to help. 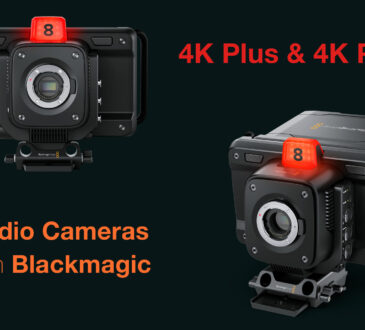 Lucy Parker10 months ago
The Ultimate Self Contained Live Production Camera Introducing the world’s most advanced self contained studio camera. Designed specifically for use... 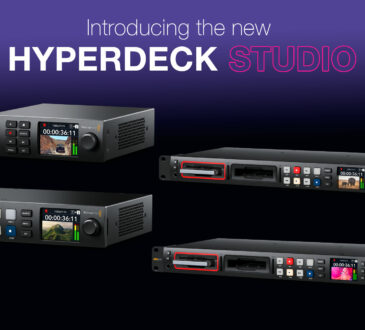 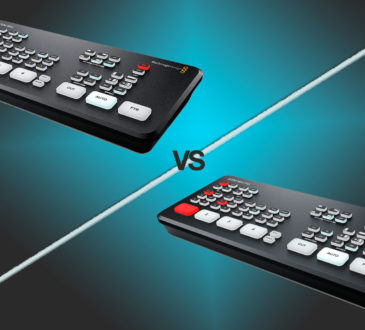 Richard Eastwood2 years ago
With the launch of the ATEM Mini Pro, Blackmagic extends its live HD mixing and streaming systems for social media creators,... 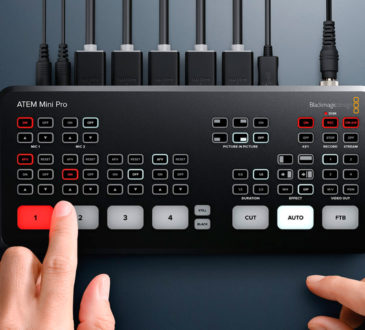