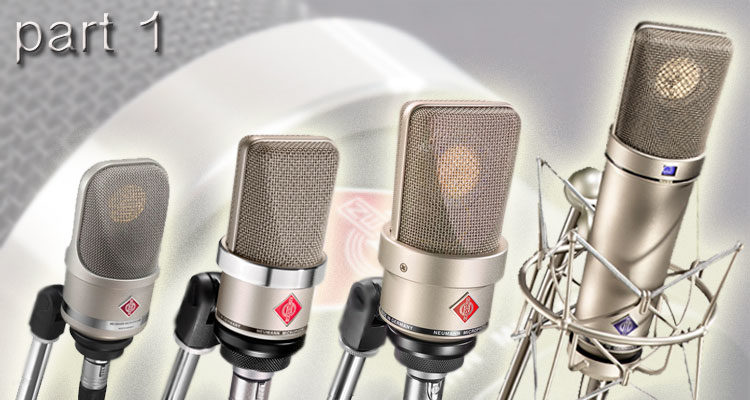 Here at ESV we’ve once again enlisted Mike Aiton to conduct an independent review; this time its the turn of a selection of Neumann microphones. The series is comprised of three parts in total and we’ll be publishing these weekly so check back for the next installment; you’ll also have the opportunity to be part of the discussion and the results from this will be published in June, Part Four – The Public Vote Round up.

So…read part 1 of the full review below, listen to the sound clips and be sure to vote for your favourite!

‘The Family’ of German Studio Microphones – Part One

At my Twickenham studio, Mikerophonics, I have been feasting on a spread of some of Berlin’s finest Teutonic studio microphones from the house of Neumann (now part of the Sennheiser Group). Since 1967, it’s very hard to think of any professional recording studio, and not imagine in your mind’s eye (and ear), the ubiquitous U87, which is arguably the world’s most famous studio microphone.

The U87 has now grown some younger siblings, so what is it about the U87 that made it so successful?, and what do the rest of this new family bring to the party? What has the Neumann brand learned since being in business since 1928? So many questions…

Lets go through the range of microphones I tested.

The TLM 102 is based on a new edge terminated diaphragm design and, as part of its “no-frills” simplistic design brief; it has no pad or filter switches available. It is still comfortingly able to withstand up to 144dB SPL with only 0.5% distortion, so that should be your drums, guitar amps and any of ‘the brass faculty’ nonsense taken care of then.

It’s the most diminutive of the range (just), and weighs in at a modest 210g, and measures 12 cm long with a diameter of 5 cm, but still feels every bit the heavyweight Neumann in feel and is very solid indeed, despite its lack of size. No obvious physical flaws here then. Every bit ‘the studio glamour puss’. It is resplendent with its red Neumann studio livery ‘badge of honour’ on the live side of the cardioid pattern. It’s available in either satin black finish (for the slightly aesthetically challenged) or classic nickel (for the discerning studio cognoscenti), and comes in a wooden box with a solid stand mount. I used it with the optional Neumann elastic studio shock mount to reduce any rumble due to the lack of an onboard internal physical filter (thank you Richard at ESV for thoughtfully sending one!)

The TLM 102 claims to have a very fast transient response and, up to 6 kHz, it’s frequency response is extremely linear indeed, ensuring minimal coloration and a clearly defined bass range. A slight boost above 6 kHz should provide for excellent presence with voices in an overall mix and add air (or detail) with instruments.

Self noise is respectably low at 12 dB-A, and sensitivity is very reasonable at 11mV/Pa at 1KHz into 1Kohm. The TLM 102 enjoys the use of 48v of phantom power for its normal operation.

Next up the line is the infamous TLM 103, one of Neumann’s best selling microphones. It’s slightly larger than the 102, and comes in at 13cm with a 6cm diameter, and tips the scales at 450g (over twice the weight of the TLM 102). The TLM 103 uses the K103 large diaphragm capsule from the legendary U67 & U87 microphones, so has very posh parents! Again this is a pressure gradient (cardioid only) single diaphragm capsule. It uses a transformer-less circuit and again, along with its smaller TLM 102 brother, to reduce cost, it has no pad or filter switches available.

The self noise is very low at 7dB-A (I think the lowest I have ever seen on the market?) and sensitivity is impressive at 23 mV/Pa at 1KHz into 1Kohm. Max SPL is 138dB SPL with only 0.5% THD, slightly less than the TLM 102, but still capable of withstanding more than most. These are impressive stats, but what is the frequency response like? It’s Razor flat but with a presence peak starting to lift at 3kHz, but about 5dB up and flat from 6kHz to about 15kHz. The presence peak is wider and flatter, but slightly more elevated than the TLM 102.

The capsule and the entire internal construction is elastically mounted so that the frequency response can reach 20Hz without colouration. The TLM 103 is therefore more sensitive to vibration and wind noise, so the use of good mounts and pop shields is recommended.

It’s also available in both satin and matt black finishes.

The TLM 107 is the new innovative kid in the family and has some rather jazzy options. It sports a softer more rounded look than the traditional Neumann, slightly aping the look of the classic M49, and measures 14.5cm, with a diameter of 6.5cm. The weight is very similar to a TLM 103 at 445g.

The TLM 107 is different from the TLM 102 and 103 in that it is a multi pattern pressure gradient dual diaphragm transducer. It features the standard omni, cardioid and figure of eight patterns, but also the in between patterns of wide-angle cardioid, and hypercardioid. It’s the first Neumann microphone with an edge terminated capsule (like an AKG 414), which apparently reduces the sensitivity to dust and humidity and can increase diaphragm life.

The self noise is 10 dB-A and the Max SPL is 141dB SPL with only 0.5% THD, but can be increased to 153 dB SPL with -12dB pre attenuation (I suspect your Trumpet player will asphyxiate and implode before that kind of SPL!).

The most visible innovation on this microphone is the clever use of a joystick control to adjust settings. It’s a bit like if you mated a Neumann with an ipod, ‘mechanical class meets engineering innovation’?

Polar patterns are adjusted by toggling it up and down, to the right to set the pad (flat, -6 dB, or -12 dB), and to the left to set the low cut (linear, 40 Hz and 100 Hz). When a setting is made, the selected option stays lit with a white led for 10 seconds on the rear of the microphone (to avoid distracting the talent).

The frequency response is flat as pancake in cardioid, with a lift at 12Khz (gently starting from about 8Khz), In omni there are a couple of dips at about 4kHz and 7kHz, which Neumann cite as the critical ‘s’ sound bands. Neumann also claim the grill mesh is acoustically optimised to reduce pop sounds. I still think I would always use a pop filter. Why risk?

Sensitivity is good at 11 mV/Pa at 1KHz into 1Kohm – fairly consistent among the range.

So this microphone would seem to be the flexible but affordable “Swiss Army knife” of the range: capable of recording any loud instruments, optimised for clear and sibilance free speech and flat enough for orchestral duties, with the ability to record down to a double bass low E and filter out rumble below that. Phew!

The most ubiquitous studio microphone in the world, the U87ai is an award winning large dual diaphragm microphone with three patterns, Omni, Cardioid and Figure of Eight. There is a 10dB pad to enable recording of up to 127dB SPL. It is not a great choice for super loud sound duty and care may have to be exercised. There is also a bass roll off switch which rolls off LF from about 500Hz down, so is used to mitigate the proximity effect when VERY close to the mic in cardioid mode. It is not an HPF like in other microphones, so please note the difference!

The U87 measures 20cm, with a 5.6cm diameter, and weighs in at a hefty 500g. In your hand, like all the Neumann microphones, it feels the epitome of quality engineering and craftsmanship.

The U87ai is often cited as ‘the voice over microphone’, ‘the go-to singer’s microphone’, or ‘the best orchestral spot microphone’, and is even many people’s default piano microphone.

To test the family out I recorded several sources:

The mics were plugged into a Focusrite ISA One mic amp and then into an Avid Pro Tools HD via an Avid Omni A to D at 24bit, 48KHz.

Neumann microphones and a transformer coupled microphone pre amp (like the ISA One) are a known good combination and the source for millions of hit recordings over the years.

All recordings were made as close as I could get to a standard loudness of -23 LUFS, then post produced with Nugen Audio LM Correct to make them exactly -23 LUFS equal loudness. The ear has a tendency to prefer louder sources, so loudness matching was essential to enable a level playing field.

A recording pass was made for each microphone. Simultaneous recoding was not necessary, as I wanted relative ‘comparative recordings’, not absolute. Wayne as a Guildhall trained professional cellist, was able to offer very constant performances, as was Adrian, as a seasoned spoken voice professional.

No compression or EQ was used in the recordings.

I also recorded my AKG 414 B-ULS (in cardioid) as a reference (my standard in-house microphone here at Mikerophonics), as it is a very well known sound to many.

What Do You Think?

To make this a fun test and to find out what the readers think, I have made this a blind test, with five microphone recordings to listen for in each category. Please listen on your best headphones or on as good monitoring as you can to be able to give your opinion. Don’t be shy as there is no right and wrong – only opinion, and yours is valid!

Listening can be done here for the Cello recording on soundcloud:

Listening can be done here for the Male Voice Over recording on soundcloud:

or you can download the Pro Tools session and listen to the 24bit 48KHz original recordings here.

ESV are an approved certified Neumann reseller who are committed to carrying a large amount of stock available on a free, next working day delivery service – you can purchase all of the featured microphones from their website:

Price Match: ESV will not be beaten on price and to ensure this they offer a Price Match Guarantee*.

I will be recording a female voice, and some electric guitar. Check back in soon for more blind listening fun and voting..

To listen and get feedback, I recruited some pairs of ears I really trust with a wide variety and experience base.

In part three I give our combined opinions and compare these to the poll results.

Mike Aiton was weaned at the BBC in the 80s, but after breaking free 30 years ago and becoming a senior mixer at Molinare, he ran several London post-production sound departments. He is now mostly found mixing and sound designing in his boutique Twickenham post production studio, mikerophonics. In his spare time, when not thrashing gear to within an inch of its life, he takes therapy for his poor jazz guitar playing and his addiction to skiing & Nikon lenses.
view all posts
UK X Factor Arena Tour Powered By Blackmagic Design Live Production Workflow
Neumann Microphone Comparison – Part Two 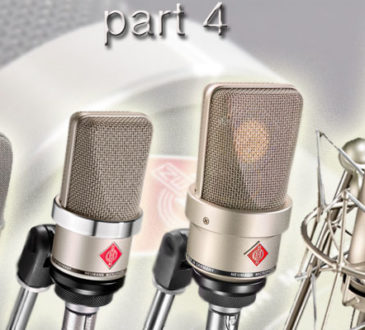 Lucy Parker3 years ago
Firstly, allow us to apologise. When we originally posted our Neumann Microphone Comparisons 1-3 we promised to bring you Part... 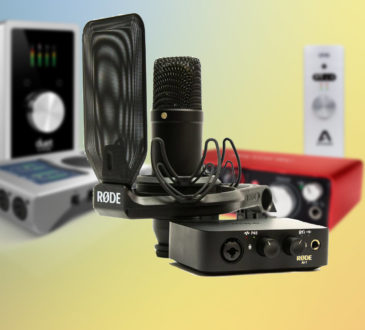 Phil Haines4 years ago
In the fifth and final instalment of our USB Audio Interface reviews, Phil takes us through the Rode AI-1. The... 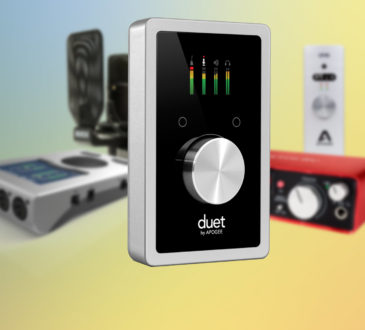 Phil Haines4 years ago
In the fourth of our USB Audio Interface reviews, Phil take us through the Apogee Duet 2. Apogee have always... 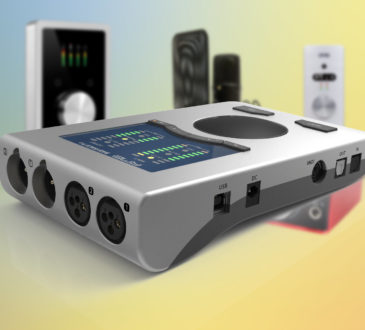 Phil Haines4 years ago
In the third of our USB Audio Interface reviews, Phil takes us through the RME Babyface Pro. The Babyface Pro...